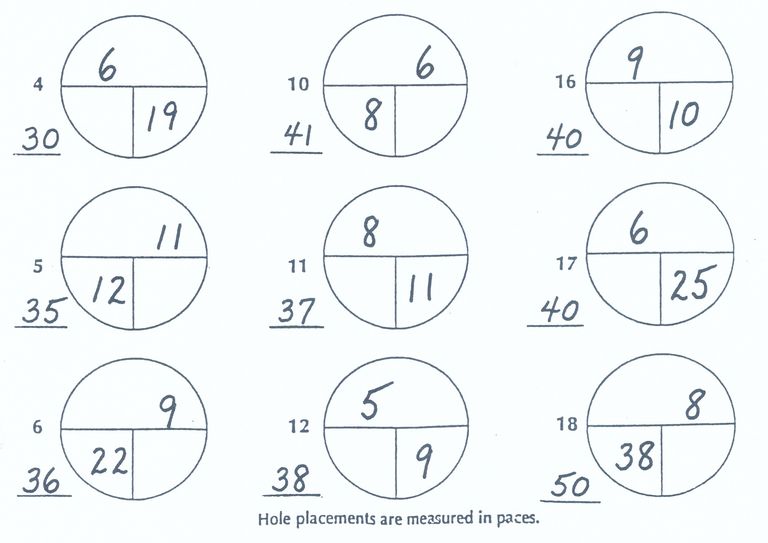 A pin sheet is something golfers encounter at some, but not all, golf courses. The purpose of the pin sheet is to tell golfers where on the putting green the hole is located. Is it front, middle or back? Left, right or center?

Pin sheets can be very basic or can provide a bit more information and be a little bit more complex to interpret. Over the following few pages, we’ll take a look at different types of pin sheets golfers can encounter, from the most basic version to the more informational ones.

Note that pin sheets can also be called pin charts, hole charts, hole location sheets or hole location charts. Golf courses that use pin sheets usually provide them free of charge to all golfers; they might be printed on glossy, high-stock paper or be a simple photocopied sheet of paper. But regardless of the form, all of them serve a good function: providing the golfer with information about the hole.

The basic function of every pin sheet is the same: To tell the golfer where on the putting green the hole is located.

And the most basic way to do that is represented in the pin sheet here. These most basic pin sheets typically show all 18 greens, drawn to give the golfer an idea of each green’s shape, with a simple dot to represent the location of the cup on each green.

Knowing where the hole is located gives the golfer an idea of how to approach each green; whether to aim for the front, back or middle of the green (affecting yardages and club selection). And whether the flagstick is positioned on one side or the other of the green might affect your shot selection or aiming point into the green.

Just that basic information might even impact your tee shot. Say you’re playing a course you’re familiar with. You’re on No. 12. The pin sheet shows the hole located on the back right part of the green. You know that there’s a bunker guarding the front right of the green and that the back right part of the green is on a shelf. You know, in other words, that the best way to approach this hole location is from the left side of the fairway. So the pin sheet has just helped you decide on a line off the tee.

How do golf courses update these basic pin sheets? They typically have copies of their pin sheets that show only the shapes of the putting greens, with no hole locations yet marked. When the course superintendent sets the hole locations for the next day’s play, he and/or one of the club pros takes a blank pin sheet and adds in the location of the cup on each hole. Then photocopies are made if that marking is done by hand, or copies are printed if it is done on a computer. Pretty simple.

A few notes about the specific illustration above: The large numbers to the left of each green are the hole numbers. The numbers below each hole number represent this particular course’s pace of play requirement (not necessarily something you’ll see on a typical pin sheet). Also note that at the back of each of the three greens above, there is another number. That number is the depth of the green, from front to back, in paces. The top green (No. 11) is 33 paces deep.

The type of pin sheet represented by the image here is typically referred to as a “hole location chart.” The purpose of a hole location chart of this type is not to show you the specific location of the hole on each green, but the generallocation.

Note that each of the greens above is divided into six segments, marked 1, 2, 3, 4, 5 or 6. We know, therefore, that this particular golf course rotates its hole locations among six different sectors of each of its putting greens. But how do you know which sector is in use on the day you are playing? The golf course will tell you.

So you still learn whether the flagstick is back, front or middle; left, right or center; and you still get an idea of how to approach the shot into the green. Also note that below each green in the image above, this course also informs its players how deep the green is. Sticking with Hole No. 7, we know that green is 37 paces from front to back.

The pin sheet example here is one that golfers might, occasionally, encounter at a golf course during a non-tournament round. But golfers are most likely to encounter this type of pin chart when playing tournaments. The outtake above is from an LPGA Tour event.

The first thing you’ll notice about this example is the greens are represented by circles; there is no attempt to show the actual shape of the green. Also, no hazards are represented. What we have are perfect circles, with one straight horizontal line and one straight vertical line, and some numbers.

How do we make sense of this?

First, the small numbers to the left of each circle are the hole numbers, so we are looking (clockwise) at holes 1, 7, 8, 2. The handwritten number to the left of each green is the depth of the green in paces. Hole 7 (upper right) is 42 paces deep from front to back.

Compare the pin sheet style here to the one on the previous panel and you’ll recognize that they are essentially the same, just a cosmetic difference. The main difference is that in the example above, the horizontal line (representing how many paces from the left or right edge the hole is cut) does not extend fully across the circle representing the green. The horizontal line only goes halfway.

How do you know whether the paces are measured from the left or right side of the green? The side the horizontal line touches is the side from which the measurement is listed. In the image to the left, the bottom green is Hole 4. Because the horizontal line starts on the left side of the circle, we know that the “12” means the hole is cut 12 paces from the left side of that green. We also know that the hole is cut 11 paces from the front edge on a green that is 27 paces deep.

One more slight difference between the above pin sheet and the one on the previous page: As shown on Hole 3 above, the cup is centered, left-to-right, on that green. That’s what the “T” formation means. (The pin sheet on the previous page still showed a horizontal line across the green but with “CTR” to communicate that the flag was centered.)

“Paces” is the term used in pin sheet measurements, and roughly “paces” translates to “yards.” So how do we apply these pacing measurements to the approach shot we have back in the fairway?